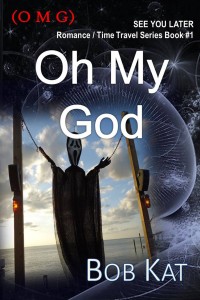 Disclaimer: This book was sent to me by the author, Bob Kat, for an honest review.

Plot: Fifteen-year-old Kelly Welch has just moved from Texas to Florida to live with her Aunt Jane, due to her parents recently being killed in a car accident. Soon after moving in with her Aunt, Kelly meets her new next door neighbors Scott and Austin. Scott who is very bright and has a passion for inventing things, is the complete opposite from his best friend Austin, who is the quarterback for their high school. One day while Scott is helping Kelly clean her garage, they come across a radio that was invented by Thomas Edison that could allow a person to communicate with the dead.

After Kelly, Scott, Austin try out the Telephone to the Dead for the first time, they hear a girl named Wendy pleading for help…that died in 1966. Now Scott has invented a time travel app that he hopes will take them back to a few days before the death of Wendy so they can save her. But while they are about to time travel back to 1966, another girl from their high school accidentally travels with them. Now the four of them must find a way to save Wendy, without changing all of history.

Opinion:  This book, OMG (Oh My God) (CUL8R #1), reminds me of the genre of book that I loved to read when I was a teenager. A book with a main character that was close to my age, thinking about things that I thought about, but was also packed with adventure and didn’t get overly romanticized. Though I would say this book targets a younger age group such as teenagers or “tweens”, it is a fun read for an older age group as well.

This is the first book in the CUL8R series, and starts off with Kelly who has just moved to Florida. Not only is Kelly mourning the recent death of her parents, but she was moved from her life in Texas to live with an Aunt that she has only met a few times in her life. Thankfully her aunt turns out to be really easy going, even if she is an assistant district attorney. Soon after the story starts, Kelly is introduced to her first neighbor, Scott, while she is cleaning her garage. Scott is both a brilliant and quirky inventor, but basically comes off as a very cool “nerd”. While they are cleaning they come across an old box and letter that was addressed to Kelly’s great-great-grandfather, from THE Thomas Edison. In the letter, Edison states that inside the box was an invention he was working on but did not finish called the Telephone to the Dead. Together Scott, Kelly and Austin (Scott’s best friend and quarterback of their high school) test out the radio and start to communicate with a girl named Wendy. After researching who Wendy was, they find out that she was a very popular senior who had apparently committed suicide in 1966. Unsure of how else to help Wendy, Scott invents a time travel app that will get them back to 1966 so that they can save Wendy from her unfortunate death. But things get even more interesting when Zoey, another very popular mean girl who goes to school with Scott and Austin, accidentally travels back in time with the trio.

This was a very casual and enjoyable read for me. Though it does target a younger audience, I personally enjoyed it and it kept me reading. There has been so many times that the main character has annoyed me after a while (HOPEFULLY this doesn’t happen in the rest of the series!!) but I really liked the character of Kelly. It was so refreshing to have a fifteen year old NOT be COMPLETELY obsessed with boys and them liking her. The fact that she barely noticed that Scott and Austin might like her as more than a friend was spot on, and the author didn’t push it too much either. Books that are overly romanticized and characters that are constantly thinking about their emotions gets so exhausting after a while (Yes, I am talking about you Twilight) so I am very glad this wasn’t the focus of the story. Scott and Austin are different from the usual characters as well. Social status doesn’t affect their friendship or their personalities even though they are so different, which is very unlike teenagers nowadays. Scott is considered a nerd and Austin a jock, but they are best friends and neither acts better than the other. Then here comes mean and popular Zoey completely “changing her stripes” and being a genuine person. I am just so impressed with the characters and how the authors shaped them, I ADORE them.

This falls into a Young Adult/Adventure series, but I think it could also be considered as mystery due to the characters trying to find out what happened to Wendy. The clues the authors give away to the reader are fairly straight forward, and the reader gets to be included in the thinking process with the characters as they try to figure out what is happening. I noticed that it took the characters a long time to realize that Wendy didn’t actually kill herself, which I thought was rather obvious. It just seemed to take a long time to keep up and to actually realize what was going on, which didn’t make them look all that bright. The writing style is fairly straight forward and easy to follow, although there are a few grammar mistakes and formatting errors in the Kindle version. Also, the title seems to be a bit misleading from what the story is actually about so I wish it was different. I am looking forward to reading the rest of the series and seeing where the characters travel to next, as well as seeing if all that time traveling is going to affect them after some time. This is a great story for teens who can relate to the character and love adventure, or adults who enjoy a youthful read.

abookishpod.com/
Lu is lost in books