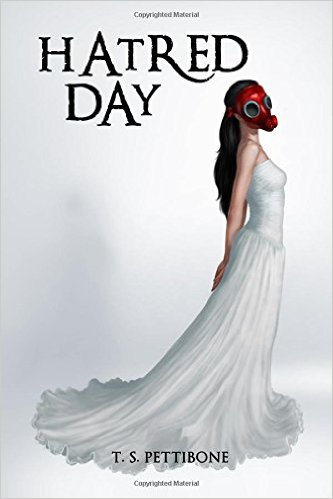 Disclaimer: This book was sent to me by the publisher, Chrysanthalix Press, via NetGalley for an honest review.

Humanity is unified against the Inborns, an extraterrestrial species with godlike intelligence and abilities whose arrival on earth caused an environmental and biological crisis.

Enslaved and despised even by her own Inbornkind, 18-year-old Snofrid reawakens to the world after having her memories stolen and is certain of only one thing: she will do anything to ensure her freedom. But her resolution is soon tested when the son of a high-ranking human official is murdered and her home city becomes the center of the interspecies war, one that might see the Inborns purged. Desperate to find a way out of the city for herself and her family, Snofrid risks making a deal with the manipulative Inborn Commander, Hadrian, and his brutal cadre of soldiers. Her task is simple: take part in a historic hunt that will bring wealth and fame to all who survive. Unfortunately, Snofrid’s role is one in which survival is rarely seen–the bait.

Opinion: First, take a moment to appreciate that cover. It’s damn swoon-worthy. The dark side of me that has a pitch black soul is tingling guys, tingling.

As I write this, I am literally having a side conversation with a fellow book nerd on Bookstagram about how incredibly disheartening and frustrating it is to fall in love with a book, finish said book, and then realize that there is a SECOND book…but it doesn’t come out until next year.

I mean…really? Are you guys purposefully trying to pour miniature hand grenades down my throat in the hopes that my heart and soul will either implode or explode?!? It feels as if microscopic nuclear bombs have entered my body and they are seeking out every aspect of myself that is happy and content…and they’re just BLOWING IT ALL UP! Mark my words, authors will be the death of me.

Due to the book description being fairly self-explanatory, I am not going to be giving my own little explanation of what happens. There is so much that goes on in this book, and frankly it is confusing my brain just trying to figure out how to explain it all. In regards to that, I would like to touch on the fact that this book can be hard to grasp at first. Our two authors, twin sisters Brittany and Nicole Pettibone, have created a wonderful and elaborate world for us readers to get lost in and obsessed with. The reason this story can get confusing in the first half is because the reader is being introduced to A LOT of things. With all the lingo and strange names being thrown at the reader and barely explained, it gets hard to keep up with what is happening. I found myself finding it hard to differentiate the characters at first; as well as, understanding what creatures did what and what certain names for things meant. For how elaborate this world they created was, I think this book should have been way longer so that they could have explained things better to the reader.

Now don’t let this scare you away from reading, because I certainly hope it doesn’t. You can honestly get through the first half of this book having a vague understanding of what a swangunner is or what kind of beast Snofrid is talking about. By the time you hit about 40% of this book, be prepared to skip out on any plans you might have made for the rest of the day. This is where you will get HOOKED. As soon as Snofrid comes in contact with that Mania Mirror and gets back most of her memories, you fall head first into being seriously in love with this story. This is where the reader connects to the main character, Snofrid, and where we truly understand EVERYTHING (or mostly everything) that is going on in this maze of a story. I felt such an immense connection to Snofrid as I was being carried through her childhood and upbringing, and I was able to understand this world as Snofrid did. Maybe this was a purposeful move made by the authors, maybe it wasn’t. Whatever the case may be, keeping me confused and then blowing my mind completely worked.

This is also about where the reader falls in love with Lycidious, because trust me darlings…you will. To my readers that will read any book that will give them another “book boyfriend”, look no further. This kid is a serious bad boy, and he will without a doubt put every other bad boy to shame. Lycidious is lethal, dangerous, and on the border of being downright psychotic. He is the shadow or protector of Snofrid who is a half-breed, which means that a lot of people want her dead.  Lycidious will basically do anything to keep her safe as it is what he swore to do, and yes readers, that means he will kill for this girl in the most brutal and graphic ways. Yep, murder. *Sigh*…oh how all the girls swoon!

Basically, I think I have found a new favorite series. I just can’t get over how imaginative and cutthroat this story is, and it never ceases to amaze me. There is a fantastic amount of detail put into this story, and the idea behind it all is extremely unique. I will be waiting patiently for book 2, Verdict Day, and HOPEFULLY it will be released early next year. GO GET THIS BOOK READERS, you will not be disappointed.