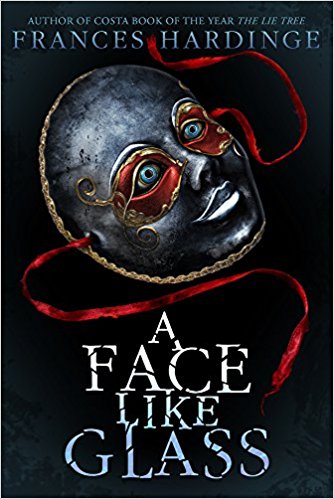 ~ Buy through the links below ~

Disclaimer: This book was sent to me by the publisher, ABRAMS Kids, via NetGalley for an honest review.

Plot: In the underground city of Caverna, the world’s most skilled craftsmen toil in the darkness to create delicacies beyond compare—wines that remove memories, cheeses that make you hallucinate, and perfumes that convince you to trust the wearer, even as they slit your throat. On the surface, the people of Caverna seem ordinary, except for one thing: their faces are as blank as untouched snow. Expressions must be learned, and only the famous Facesmiths can teach a person to express (or fake) joy, despair, or fear—at a steep price. Into this dark and distrustful world comes Neverfell, a girl with no memory of her past and a face so terrifying to those around her that she must wear a mask at all times. Neverfell’s expressions are as varied and dynamic as those of the most skilled Facesmiths, except hers are entirely genuine. And that makes her very dangerous indeed . . .

WHEW! Listen up guys, because this is one book that NEEDS to be noted and fawned over.

“It draws you in. You twist your mind into new shapes. You start to understand Caverna…and you fall in love with her. Imagine the most beautiful woman in the world, but with tunnels as her long, tangled, snake-like hair. Her skin is dappled in traplantern gold and velvety black, like a tropical frog. Her eyes are cavern lagoons, bottomless and full of hunger. When she smiles, she has diamonds and sapphires for teeth, thousands of them, needle-thin.”

Neverfell’s story begins at the young age of five, when she is found by Cheesemaker Grandible after falling into a vat of his curdling Neverfell milk. After rescuing her and taking one look at the young girl, Grandible notices the differences in the young child, covers her face with a mask, takes her in and appoints her as his apprentice. After some seven years later, Neverfell is accustomed to her life as a cheesemaker. But unable to remove her mask around other people or to leave the cheese tunnels, she finds herself fighting a curiosity about what lays beyond. Soon Neverfell’s opportunity to leave the tunnels presents itself, and she gets her first look at the world that she has been hidden from. But her freedom is short lived when her mask falls from her face, and what lies beneath is shown to the people of Caverna. Neverfell, unlike the residents of Caverna, is able to make expressions on her own without having to be taught. As word travels of Neverfell, she becomes sold to the highest bidder. Caverna is flushed with experts in dangerous and strange delicacies, and murder is just another game for the members of the court. Pushed into a world where Neverfell finds trust in the wrong people, she struggles to find a way to protect herself and to recover the memories that she feels may be lost forever. But most importantly, to find a way out of Caverna.

Caverna. Woah. This place is seriously vicious guys. Do you remember reading The Hunger Games and being introduced to the strange people in the capitol? These people were insane and followed bizarre fashion trends that made them both appealing and frightening. Trust me when I say, the capitol has NOTHING on the court in Caverna. These people are PSYCHOTIC. They create wines that have minds and temperaments of their own, cheeses that can explode upon a slight bump, and strange foods that have creatures trapped inside gelatin. Not only do they spend all of their free time trying to poison rival families or hire assassins, but they are unable to make facial expressions on their own. The higher up in society and the better-off you are, the more “Faces” you are able to buy for yourself. People of a lower faction usually are unable to have 1 to 3 faces, depending on their job titles.

How to prepare the perfect Cardlespray Wine:

“One hundred and three years…The grapes spoil if they are exposed to loud noises, so they are tended by a silent order of monks, and all the local birds are killed. The fruit can be harvested only at night during the new moon, and must be crushed by the feet of orphans. The barrels are stored deep in the earth, and only the softest, sweetest music is played to them, continually, for over a century. And after all this, the Wine is fit to be drunk…unless somebody throws it over a table.”

Neverfell finds herself caught right in the middle of the chaos that is Caverna. The people of the court are all trying to get her hands on her for personal benefit, she cannot remember her past, and there is a strange person labeled “the Kleptomancer” running around Caverna stealing incredible objects with no apparent motive. I felt so horrible for young Neverfell throughout this story, and it was honestly staring to feel like something out of A Series of Unfortunate Events. Her innocence started to become her downfall, and it was heartbreaking to see her trust in so many people that proved to be using her in a game much larger than her. Her character grows a great deal in this story however, and I really enjoyed who she becomes. She still has her morals and good intentions, but acquires a cunning and righteous personality by the end of the story. Not only does Neverfell work to help herself be free of Caverna, but she fights to free those who have no voice at all.

The writing in this story is AMAZING, and I can’t wait to start reading other books by Frances Hardinge. She writes with an amazing creative and descriptive style, and it almost feels like poetry after a while. She PERFECTLY set the scene for Caverna as being a dark and curious place, one that can both thrill and kill a person. I thought the entire idea for having a civilization underground was amazing, but one where the characters aren’t able to make their own facial expressions? GENIUS! I seriously couldn’t get enough of this story, and I am wishing it was a full-blown 20 book series. This is one of those stories you wish would make it to the big screen because of how dazzling it looks in your head, but one you fear they will completely ruin…like they usually do.

All in all, I LOVE this story! I have nothing negative to say, not one thing. I can’t help but give this book 5 stars, which I hope will lead to many of you going and purchasing this story RIGHT AWAY. It is the perfect amount of fantasy and science-fiction, and a great read that will twist your mind into two. This book is suitable for all ages, but the youngest I would say is Teens because the writing could get a little confusing for a younger audience.

12 thoughts on “Book Review: A Face Like Glass by Francis Hardinge”