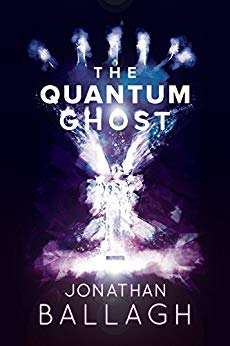 Disclaimer: I was sent a copy of this book by the author, Johnathan Ballagh, for an honest review

Plot: On a cold autumn night, twelve-year-old Remi Cobb makes a startling discovery—a mysterious object floating on the pond in her backyard. With no idea where it came from, or how it got there, Remi is compelled to unravel its secrets. Her quest for answers takes her on a perilous journey across realities, where she finds a crumbling world—and the dark forces behind its ruin. Here she learns the truth about her connection with the strange object, and of those that will stop at nothing to destroy them both. But even if she can find a way to survive, can she find a way home?

Are all those fairy and assassin stories getting you down? Too much pumpkin juice in your mortal cup? Not enough A.I. in your glass palace?

A few 3D printers, alternate dimensions, and an absurd combination of 1’s and 0’s is all you need! Not sure if black holes and quantum physics is your thing?!?

The Quantum Ghost guar-an-tees a safe and reliable journey into another world, with the protection and guidance of a metal dog and a slightly amnesia ridden robot child.

It’s ONLY the fate of a thirteen-year-old girl and an entire world in your hands! Yes, there may be a few virus ridden robots trying to kill you along the way, but that’s the fun part! Right?

Strap on those goggles and space boots kids, because we’re walking into another dimension.

No “actual” or “official” guarantees of safe travel to another dimension have been made by this author.

Doctors orders have required thirteen-year-old Remi Cobb to be separated from friends and stuck in her house until she gets better. But a strange encounter one night by the pond in her backyard forces Remi out of her home, and into the depths of danger. After finding a strange orb and waking up unconscious outside with no memory of what happened, Remi begins receiving packages and instructions to build some type of machinery. To her surprise, this machinery turns out to be a robot that changes her life forever. Soon Remi finds herself in the company of a young girl named Nova, a metal dog named Achilles, and a young robot named AJ. On the run from infected robots called Leaks and a dangerous leader named Kore, Remi works to find a cure for the virus that is spreading across her new friend’s world.

Peel back my preferences and call me a traitor, but I think I just jumped ship from Faeries and magic to demon robots and coding.

In all my dizziest daydreams (that was a HARD HP reference guys, look alive) I never thought I would want two books to be made into films as badly as I NEED The Quantum Door and The Quantum Ghost to be. I am praying OBSESSIVELY to the Book Gods to make this happen, because I just can’t take it! I NEED to see this on the big screen. Now if you haven’t read my review for book one of this two-part series, The Quantum Door, click here and have yourself a lovely time. For those of you who HAVE read that review (you little overachievers) then you will know how much I adore Johnathan Ballagh’s writing and imagination. I have not come across many writers that can write a Fantasy/Sci-Fi story without it being the length of a textbook, but Johnathan knows just how to get to the readers to end without leaving them feeling rushed or confused.

So here’s the low down kids: There is a world, in an alternate universe, that is filled with robots called Artifex. These Artifex were created by humans, and ironically the advanced Artifex called the Elder Minds, were the cause of the demise of the humans on this planet (see book one for that story). But the “regular” Artifex adored humans and some even went a little crazy trying to imitate them and become them. But now a virus is spreading across this planet, infecting the Artifex by turning them into zombie robots, which are called Leaks. The only chance of their survival is a cure for the virus which entails the knowledge of the “Primer Code”, which very few know about. Enter: Remi.

Remi is a young girl with a mysterious sickness that has kept her at home for some time. She is a curious and smart character, and to say that she has gone a little stir-crazy is an understatement. For her to go from being bored out of her mind day by day, to finding a floating orb by her pond and then being shipped parts to build a robot is QUITE the change of events. Wouldn’t you say? Obviously, we can guess that this young girl is the key to the survival of the Artifex, and OH BOY is she!

But our main character doesn’t do this all on her own, she is accompanied by a few of my favorite characters from The Quantum Door. A fiery girl named Nova, a metal/robotic dog named Achilles, and a “child robot” named AJ. These characters, in my opinion, are what really holds these books together and makes them so enjoyable. Robots with very human-like mannerisms and thinking is a common concept, but Johnathan Ballagh has given it a twist by giving these robots depth and emotions. The contrast between all of them gives the stories a lot of layers, and the author does an amazing job of making the reader forget that they are reading dialogue between robots and not humans.

I think one of the best aspects of these books are the visuals the reader gets in their mind while reading. I felt like I was watching all of these moments play out, rather than just reading them on a page. I was transported to another world with these characters, and all I want is to go back and be with them. I can’t help myself, I feel a bit of loss finishing this story. But let’s also not forget how truly spectacular the three drawings that we are blessed with are: 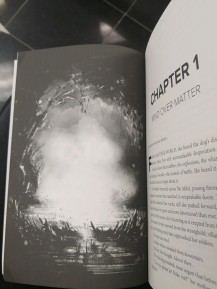 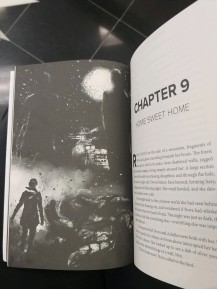 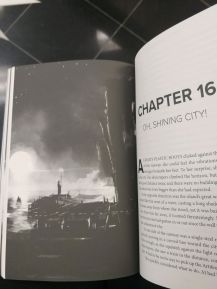 This is one of those sequels that doesn’t make reading the first story a requirement, but it might be helpful to give the reader a bit of background. One of the greatest things about The Quantum Ghost is that it’s a new story with a new main character, but we still get to see some amazing people and robots from book one. The Quantum Ghost is another story that provides and epic adventure, and gives readers of all ages a feeling of wonder and endless possibilities. This story makes me feel nostalgic and like I am a child again, and that is really all that I can ask for in a book.

7 thoughts on “Book Review: The Quantum Ghost by Johnathan Ballagh”