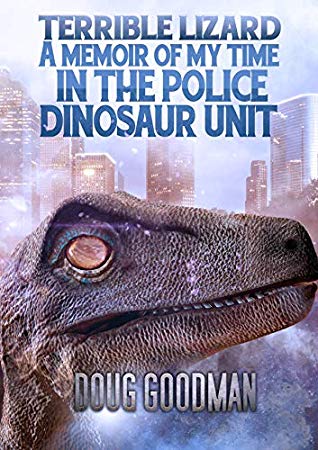 Disclaimer: I was sent an ARC copy of this book by the author, Doug Goodman, for an honest review

Or so Oak Jones thought. He’s wanted on the Police Dinosaur Unit all his life. Now that he’s in, he’s discovered that training a Police Working Velociraptor is a lot harder than he ever imagined. And if he thought training would be difficult, living with a Velociraptor is a whole new level of fun. Banshee can clear a six-foot fence like it was nothing, and he has a love for eating the neighborhood cats, which is putting Oak on the outs with his next-door neighbor, Christy Dao.

But there is a reason for everything, and when Oak discovers why Banshee struggles, it breaks his heart.

Terrible Lizard is a funny and endearing look at life with Banshee, a great working dinosaur, but one terrible lizard.

Oak Jones has been obsessed with dinosaurs since he was a kid. With his classmates nicknaming him “Din-Oak” and “Oakasaurus”, he knew that the Police Dinosaur Unit would be his true calling. So he worked is way into Houston PD, and spent 7 of his 10 years in law enforcement in the Dinosaur Unit. But his journey to becoming a dinosaur handler was rocky, especially when it came to training his assigned velociraptor named Banshee – who had a tumultuous past and a pension for giving the cold shoulder. But once Oak learned more about Banshee, the two begin to embark on an adventure of hunting down criminals and forming an unbreakable friendship.

This book is SO great.

It’s cute, fun, lighthearted, witty, comical, creative, entertaining and even gets a little dark! But only a little. 😉 The entire story is broken up into tales of Oak’s entry into the Houston Police Dinosaur Unit, his training, and the seven years he spent as an active member alongside his partner and velociraptor, Banshee. The book is obviously a work of fiction, but it is set in present times and closely mirrors how our world is now…except with a few dinosaurs roaming around and chasing after bad guys.

As always, author Doug Goodman executes this fantastical tale flawlessly by blending fact with fiction by way of research and his creative imagination. This book is filled with SO many amazing moments that had me giggling and blissfully enjoying every page! From a kleptomaniac dinosaur and dinosaur smuggling, to the PDU officers instructing their handlers to train a chicken to dance by way of positive reinforcement. This book is absolutely random, but everything you didn’t even know you wanted in an Urban Fantasy. The characters are relatable, likable and have a nice mixture of sarcasm coating their dialogue. I found it so easy to immerse myself in Oak’s stories of hunting down bad guys and training Banshee, and was completely impressed by the amount of inventive little tales that were shared.

Oak is a great character to tell this story, and I’m glad he did. He is sarcastic, funny, charming and just a good guy all around. His character exudes such a fierce loyalty and love for dinosaurs, and when Banshee and him FINALLY start to warm up to each other…*sigh*. It’s just a magical little moment okay?

It never ceases to amaze me how thoughtful this author is when writing. He ensures that literally every reader will be able to form some kind of connection to the story or characters, and he does so in such a fun way. He talks about Pokemon Go, creates a backstory for dinosaurs that are trained in China, explains the civilian interactions with police trained dinosaurs and how people react to seeing them, and there is even a dinosaur named Chris Pratt.

If you have read my previous reviews of Doug’s books, mainly his Zombie Dog series, then you will know how much I love gushing over the resources and real-life experience he entwines into each of his books. His time spent in Search and Rescue and his dedication to spreading the word of “dog working alongside man” really shines through in Terrible Lizard. The relationship between Oak and Banshee reminded me of the fierce bond and mutual respect that Angie and Murder (Cadaver Dog) share., and honestly…it took all I had not to shed a few tears thinking about that lovely duo.

Anyways, this is an Urban Fantasy tale that is suitable for all ages. I think it was originally intended for a YA/Adult audience…but the author knew a child might be inclined to pick up a book with a dinosaur on the cover, so he made sure the book was kid friendly. And it is! Thought there were some grammatical errors throughout the book, it was not enough to become distracting or deter the reader from the story as a whole. It’s a quick read that will have you fully consumed and entertained until the last page. If you are looking for a book that is a little different, packed with creativity, and wanting to read something with a light-hearted mood – read this!

Because who doesn’t want to read about klepto dinosaurs?

10 thoughts on “Book Review: Terrible Lizard: A Memoir of My Time in the Police Dinosaur Unit”