1. What Kind of Girl by Alyssa B. Sheinmel 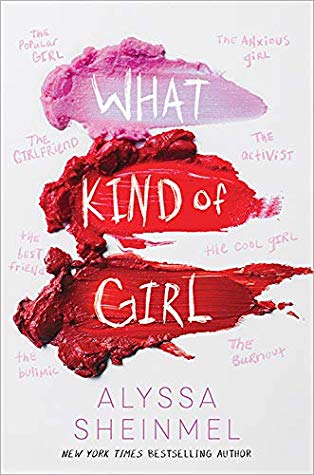 If Alyssa B. Sheinmel writes something, I read it.

After she totally set my heart on fire with A Danger to Herself and Others, and made me weep to extinguish the flames, I have become a loyal reader of her mental health stories.

What Kind of Girl is about a girl who goes to her principal with a bruise on her face, expressing how her boyfriend hit her. But her fellow students don’t know what to believe. They find it odd that she went to the principal instead of the police, and that she stayed with her boyfriend even though he was hitting her.

This story is about the divide between a student body as they seek answers.

And in true Alyssa Sheinmel fashion, I just KNOW this is going to hurt me.

Time travel and the threat of mass murder?! Hell to the Yes.

Malice is a Sci-fi thriller about a girl named Alice who is contacted by her future self (Older Self – OS) and told that a student at her school will grow up to wipe out two-thirds of the population with a virus.

Apparently it’s filled to the brim with twists and blindsides, and there’s even a lovely romance to look forward to.

3. A Good Girl’s Guide to Murder (Book 1) by Holly Jackson

A Good Girl’s Guide to Murder was already released in 2019, but it looks like it’s getting a re-release in anticipation for the release of it’s sequel – Good Girl, Bad Blood.

Five years ago a girl named Andie Bell was murdered by her boyfriend Sal Singh, before killing himself. It seemed to be a closed case, but now as a senior at the same high school the two teens attended, Pip can’t shake the feeling that there was more to the famous tragedy that plagued her town.

As she dives deeper into the secrets surrounding the strange case, Pip quickly learns that there is someone in her town who doesn’t want her to know the truth.

4. All the Stars and Teeth (Book 1) by Adalyn Grace

Said to be for fans of SJM and Stephanie Garber, this series is packed with magic, adventure, mermaids and PIRATES!

All the Stars and Teeth is set in a world where seven islands represent that seven types of magic that a person is able to practice. Once a person chooses which form of magic they wish to study and master, they are then sent to that specific island.

But as the Princess of of Arida, Amora is expected to be a wielder of her Islands magic, Soul magic-the ability to read someones soul. But when she is tested to ensure she can handle the magic, she fails and is forced to flee. She then finds herself amid a pirate ship after striking a deal with a man named Bastian who claims he can help her reclaim her lost magic.

There seems to be A LOT to this story, and I am so excited to read it and get lost in this magical world.

The third and FINAL book in the Ash Princess trilogy!

For those of who who haven’t even started Ash Princess yet, it’s about Princess Theodosia as she is forced to live in the kingdom of the Kaiser who wiped out her ENTIRE kingdom when she was just a wee lass. She is forced to pretend to have forsaken her people, but really, girl is just waiting for the opportune moment to kick some ass.

In Ember Queen, she is free and has a rebel army following her in her quest to take down the new enemy: the new Kaiserin. With Prinz Søren as her hostage, she fights to prevail over the girl who she once considered family.

6. Together We Caught Fire by Eva V. Gibson 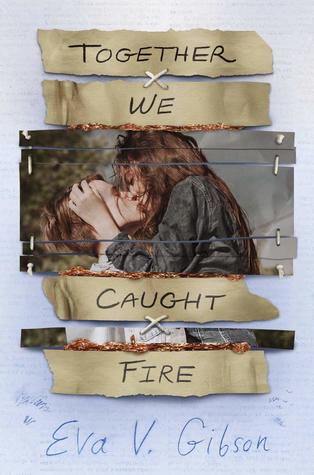 I am SUPER excited about this release, which I am starting this weekend!

A big thank you to Simon & Schuster for sending me an ARC of this little beauty, because it looks like it’s going to do a little heart ripping, and a little heart mending ❤

Together We Caught Fire is a tale of forbidden love.

Lane Jamison has had a crush on Grey McIntyre for longer than she cares to admit. But seeing as how he is dating her friend Sadie Hall, she knows them being together isn’t possible. But when her father suddenly announces that he is engaged, she finds out that his soon to be wife is the mother of none other than Grey McIntyre.

So when Grey and his mother move in, there is no denying the attraction building between Lane and Grey. But knowing that her feelings are forbidden, Lane turns to Sadie’s older brother Connor in the hopes of a distraction and a way to move on.

So ensues a tangle of emotions, a girl torn between two guys, and a whole bunch of messiness in between!

7. The Shadows Between Us by Tricia Levenseller

In The Shadows Between Us, Alessandra is trying to kill the Shadow King in order to take the throne for herself. Though nobody really knows the true extent of the power that he possesses, Alessandra isn’t the only one plotting his murder. As multiple attempts on the Kings life are taken, Alessandra finds herself keeping him alive until he can make her his Queen.

But in true YA Fantasy/Romance fashion, nothing EVER goes as planned.

💀Book Title Poem💀 . If I Stay The Way I Used to Be, Ice Kissed Ivory and Bone. It's a Wonderful Death Every Day, The Queen of Nothing Swallowing Stones. . . 💀Fill in the blanks with the last 2 books you read: "Some days I bring darkness like (the) _____, and some days I bring light like (the) _____. . . 💀Mine: Some days I bring darkness like the Bone Crier's Moon, and some days I bring light like The Morticians Daughter. _ _ _ _ _ ~*~ _ _ _ _ _ ~*~ _ _ _ _ _ ~*~ _ _ _ _ _ The amazing @herethere tagged me in the #totallyrandomwouldyourather tag! 🖤🖤 1. Night in or out? In ☕📖 2. Dogs or cats? Dogs 🐶 3. Physical books or ebooks? Physical! 4. Tea or coffee? Tea!!! 😍☕ 5. Movie or documentary? Definitely depends. But I probably watch more movies 🎥 6. Plan ahead or go with the flow? Wing that shit! 💁 7. Cake or ice cream? Ice cream! 🍨 8. Superhero or secret agent? Secret Agent! 🖤 Feel free to do the tag too! 😘🖤 _ _ _ _ _ ~*~ _ _ _ _ _ ~*~ _ _ _ _ _ ~*~ _ _ _ _ _ #booktitlepoem #bookspines #readallthebooks #youngadultbooks #beautifulbooks #witchyaesthetic #booknerds #readersofig #yabooks #yabookstagram #bookstoread #allthebooks #bookishlove #bibliobuddies
🌙Five of Pentacles🌙 A sign of tough times and struggles, this card comes up when there is loss, negative changes within your life, or feelings of isolation beginning to overpower us. . This isn't a positive card. It represents a very hard and emotionally draining time, whether it be through financial struggles or heartbreak. 💔 Feelings of defeat, being kicked when your down, and a lack of support from friends/family may begin to consume you. Things may be rough for a while, but how long they stay rough depends entirely on you. . If you're struggling, reach out. 🌿 A lot of times those close to you may have no idea you're spiraling, so getting frustrated with them isn't the answer. Ask for help, ask for support. Ask for some strength, reminders of your tenacity and resilience, and talk it through with someone. 💚 Leaning on others when you're hurting is such a strong and brave thing to do! To let the ego go and do what is best for yourself is incredible, so don't be scared to be vulnerable! 🙏 . Remember. This is just a bump in the road! Stay focused, take deep breaths and keep manifesting those dreams and visualize yourself reaching them. You'll get there! 🌱 You've got this, so keep that brilliant head up and keep going 😘 _ _ _ _ _ ~*~ _ _ _ _ _ ~*~ _ _ _ _ _ ~*~ _ _ _ _ _ #witchywednesday #tarotguidance #tarotwitch #fiveofpentacles #selfcareday #intentions #witchling #witching #witchesofig #witchyways #witchery #witchythings #witchyvibes #witchaesthetic #bibliobuddies
💀"ᴛʜᴇʀᴇ ɪꜱ ᴏɴʟʏ ᴏɴᴇ ᴡᴀʏ ᴛᴏ ᴋɪʟʟ ᴀ ᴡᴏʟꜰ, ᴅᴇᴀʀ ʜᴇᴀʀᴛ. Qᴜɪᴄᴋʟʏ." . . 💀Red Hood is a YA Feminist retelling of the classic tale, Little Red Riding Hood. Instead of a girl taking muffins fo her grandmother's house and being tricked by a wolf, this version gives a dark and painfully raw portrayal of young women and the wolves who stalk them. 🌙 When a girl becomes a woman, she becomes Little Red. And when a boy or man seeks to take the woman and what they feel is owed to them, they become the wolf. . . 💀Red Hood proved to be a completely siffere t tale than I was expecting, but a powerful one at that. It highlights female power, the strength of our bodies and minds. 💪 It shines a light on rape culture and women being treated as objects. It asks why people mourn when a man dies in the woods, but when a woman does they ask what she did, what she was wearing and if she was asking for it. . . ⬇⬇Full description in comments⬇⬇ _ _ _ _ _ ~*~ _ _ _ _ _ ~*~ _ _ _ _ _ ~*~ _ _ _ _ _ 💀"ᴵ ʷᵃˢ ᵃˡᵒⁿᵉ ⁱⁿ ᵗʰᵉ ᵍʰᵒˢᵗ ʳᵒᵒᵐ ʷᵃⁱᵗⁱⁿᵍ ᶠᵒʳ ⁱᵗ ᵗᵒ ᵉⁿᵈ ᵃˡᵒⁿᵉ ʰᵒᵖⁱⁿᵍ ʰᵉ ʷᵒᵘˡᵈⁿ'ᵗ ᶠⁱⁿᵈ ᵐᵉ ʰᵉ ᶜᵃᵐᵉ ᵃⁿᵈ ᵇˡᵉʷ ᵈᵒʷⁿ ᵉᵛᵉʳʸᵗʰⁱⁿᵍ ᵗʰᵉ ᵐᵒᵒⁿ ʷᵃˢ ᵐᵃᵈᵉ ᵒᶠ ᵇˡᵒᵒᵈ ʸᵒᵘʳ ᵇᵉᵈ ʷᵃˢ ᶠᵘˡˡ ᵒᶠ ᵇˡᵒᵒᵈ ʷʰᵉⁿ ʰᵉ ᵗᵒᵘᶜʰᵉᵈ ʸᵒᵘ ʷⁱᵗʰ ʰⁱˢ ᶠⁱˢᵗˢ ᵃⁿᵈ ᶠᵃⁿᵍˢ ʰᵉ ᶜᵒᵘˡᵈ ʰᵃᵛᵉ ᵏᵉᵖᵗ ʸᵒᵘ ˢᵃᶠᵉ ᵇᵘᵗ ʰᵉ ᵈⁱᵈⁿ'ᵗ ʷᵃⁿᵗ ᵗᵒ" . . 💀"ᴡʜᴏ'ꜱ ᴀꜰʀᴀɪᴅ ᴏꜰ ᴛʜᴇ ʙɪɢ ʙᴀᴅ ᴡᴏʟꜰ? ɴᴏᴛ ᴍᴇ. ꜰᴜᴄᴋ ᴛʜᴇ ᴡᴏʟꜰ." _ _ _ _ _ ~*~ _ _ _ _ _ ~*~ _ _ _ _ _ ~*~ _ _ _ _ _ My review is live! Link in bio! 💀 _ _ _ _ _ ~*~ _ _ _ _ _ ~*~ _ _ _ _ _ ~*~ _ _ _ _ _ #bibliobuddies #readallthebooks #bookishlove #bookaesthetic #booklife #yabooks #bookishfeature #yafantasy #newbookrelease #feministbooks #advancedreaderscopy #bookpost #beautifulbooks #redhood
💀Fairy Tales: Do you like the dark and twisted tales, or the happy and romantic ones? . . 💀I personally love a depressing, eerie and sadistic story of woes and death. 😈 But don't get me wrong, sometimes I'd prefer if they'd end on a more...happier note. Some of these tales just get downright gloomy 🌧🖤 _ _ _ _ _ ~*~ _ _ _ _ _ ~*~ _ _ _ _ _ ~*~ _ _ _ _ _ 💀Pictured is my @barnesandnoble Collectible Edition copy of Hans Christian Andersen: Classic Fairy Tales 🖤 It's stuffed to the brim with the wonderful stories we know and love, like Thumbelina, The Ugly Duckling and The Princess and the Pea ❤ . . 💀Also featured is my beautiful Crown sleeve from @fandomcavern 👑 . 💀Get yourself one and use my code to save 10%: JENACIDE10 🖤 _ _ _ _ _ ~*~ _ _ _ _ _ ~*~ _ _ _ _ _ ~*~ _ _ _ _ _ #hanschristianandersen #fairytales #witchling #witching #witchesofig #witchery #witchythings #witchyvibes #witchaesthetic #bibliobuddies #booksandcandles #bookphotography #readersofig #beautifulbooks just a reader of romance and happily ever afters

Coffee, books and me

Cosied Up with Crime

One girls journey to uncover the best crime fiction and TV.